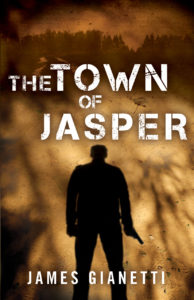 THE TOWN OF JASPER is a completely original mystery-thriller, which brings to mind Stephen King, Shirley Jackson, Nic Pizzolatto’s True Detective, even Hitchcock’s The Birds. Like the work of these writers, the ordinary becomes the extraordinary, as this wildly unexpected yet plausible mystery unfolds. There are elements of horror and violence in this suspenseful page turner.

It’s a day in the life of small town America, except as Detective Sutherland discovers in The Town of Jasper, something is very amiss. The couple he meets in this too quiet town are shell-shocked cowering, incoherent survivors of a disaster they can’t exactly explain. By bits and pieces, Sutherland puts together “the Incident,” that began two years ago and even now has the town in its grip. People collapse, they die, recover and are comatose. Young and old, a third of the town are in hibernation.

At first the government sent aid, food, water, medical supplies, but after two years with no end in sight, the aid has stopped. Jasper, uniquely stricken, has been abandoned. In an anarchic town meeting, Richard Morrissey steps forward to bring the town together. Yet Morrissey and the townspeople are in a fight for survival and are opposed by the Redeemers, crazy vigilantes and must seek the Fillmore Whites, natives, who live in the wilds.

Sutherland’s quest to find out what happened in Jasper, leads him in a circle which includes his own alienated wife and daughter and a search for a partner disappeared with no trace. Whether Jasper is “cured” or returns to normalcy is a frightening, remorseless journey to the breakdown of civilization and a detective, almost beyond hope.